When two prequels are successful, the next has a lot of living up to do. 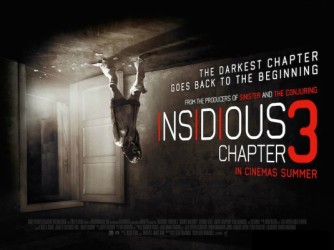 The year 2010 was productive for horror and thriller films. Paranormal Activity 2, The Last Exorcism, and A Nightmare on Elm Street were able to fill the seats in movie houses. Yet, above them all was the debut of a film that revolved in the story of a child whose body became a vessel of an evil spirit in an astral dimension. It was innovative, even revolutionary. The usual screams and jump scare brought by horror films are contested with a pseudo-real setting.

Consequently, Insidious films are tagged as one if not the most successful horror movie franchises of our generation. It was able to generate huge profit through its promising plot. It was a story following the lives of a regular American family and then tragically disturbed by evil spirits and dark dreams. This, in the eyes of a cinema-goer, can be both visually and intellectually appealing.

In its return this year, the franchise decided to bring back its resident ghost-busters and spirit questers Elise Rainier (played by Lin Shayne), Tucker (angus Sampson), and Specs (Leigh Whannell). They are meant to help Quin Brenner (Stefanie Scott) in her pursuit to contact her dead mother. The storyline was simple. It can be understood in its original form. Unlike its previous films, it showed no intricacy, no complexity, and no surprises. Hence, unlike its predecessors, it was disappointing as bland.

Sequels are meant to provide a backbone of the story. It was created to make the entire plot more beautiful and more sophisticated. If it fails to do so, why would it be created in the first place?

Insidious 3 provided no support whatsoever in the two previous films. It was full of clichés on exorcism, ugly spirits lurking in the apartment alleys, and ghost-busters. Audiences were suspended in the cinema not because of unraveling an intricate story but due to incessant running and screaming of the main character. Honestly, we are fed up with such kind of horror film treatment. There was no thinking necessary but mere jump scare triggered by a filthy old evil ghost.

There was simply no new offering to the audience. There was even no attempt to make Elise’ character to be seven years younger. All were done in a clear attempt of profit-making.

Of course, who would have forgiven the film treatment done with the final scene? It was the act where the family reunited with the mother’s ‘good’ ghost Lillith which consequents to the outwitting of the evil spirit. Its cheesiness was unnecessary and was a fail attempt to acquire the audiences’ approval.

This trend among Hollywood movies becomes inherent in our time. They would maximize the profitability of a successful film through creating unrelated sequels until it loses appeal to the public. All over again, the pitiful movie-goer bites the trap.

When movie-makers turn into businessmen, they begin to bastardize the medium we love. And what could be the best retaliation we have for them? Kill them before they start breeding.