In film, viewers are given two options; one is to scratch the surface and be instantly entertained on the follies of life, another is to immerse in the storyline and bear the emotional overload of the plot. Maze Runner: Scorch Trials chose the latter in an attempt to win the race in keeping up with the escalating demand of the short attention span audience. It joins the competition of many movies today in supplying adrenaline rush to a hungry movie crowd. 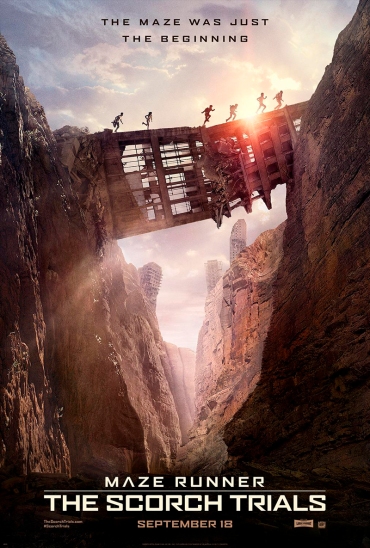 The second part of the Maze Runner trilogy epitomizes the grim reality of the current generation of movie-goers. Everything is upbeat, hyperactive, and fast-track often forgetting that movie magic is hidden in slowly paced, repeating shots, and ‘boring’ exchange of lines.

The film cinematic technique exhibits the filmmakers’ deep understanding on their audience. As their market is mainly comprised of the youth, they put emphasis on good-looking girls and boys on an endless chase of hide-and-seek. There was no point of relaxation. The viewers are suspended mid-air on what might happen next. They are not allowed to think and so are the characters on-screen who are not allowed to rest. This kind of presentation makes the Maze Runner: Scorch Trials successful in pleasing its easily bored crowd.

The film’s effective use of hyped storyline can be attributed to its book inspiration. In the James Dashner’s trilogy, readers are brought into a world where there is no certainty. Every time the Gladers feel comfortable in their new environment, it literally shatters making them look for a new one. The process is repetitive hence the feeling is intensifying. Since the beginning, it is apparent that Maze Runner is a good literary piece to be turned into a live action.

There is no denying that that film was able to win the approval of the hyperactive audience. Yet, with the intention of heightening the excitement of the viewers, the film missed discussing the vital parts of the plot. The movie ended with no clear reason why WICKED had been so manipulative, why the boys and girls were chosen to be part of the experiment, and why would it be necessary to find a cure for the Flare. The elaborate game of hide-and-seek overpowered the key points of the film.

This point, Scorch Trials should have stepped up and dug deep on the storyline in order to achieve a scratch on the memory of the moviegoers. It needs to act as a bridge joining together the introduction (The Maze Runner) and the end (Maze Runner: The Death Cure). As the film fails to advance its characters, viewers cannot help but grope in the dark in connecting with their favorite persona.

This film will eternally remind us that movie viewing is not only about a roller coaster of emotions. It is an example how the gratifying the whims of the audience do not always promise a good result. If Scorch Trials wishes to be included in the pages of film history, it will be as a movie that failed to go far as it has chosen to take the simpler route.