The Big Short is a self-aware movie that lectures audience on the US financial history using sex and pop culture. It patiently teaches complex topics of economics, stock market, and bank fraudulence to an unfamiliar and uninterested crowd. With an intention to redefine the boring nature of historical films, the movie is best appreciated for injecting comedy in a story that can be alienating. 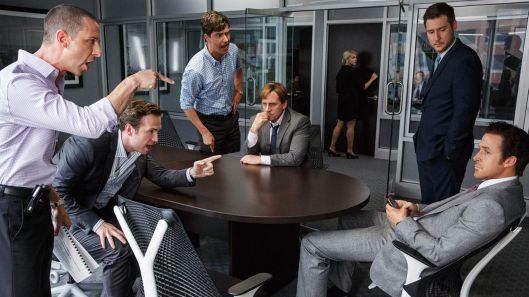 The story focuses on the lives of five American men who benefited from the 2008 US housing market collapse. They bet against the market as they predicted its downfall. While thousands of families lost homes and livelihood, they earned millions of dollars. The movie looks into the personal perspective of these five businessmen and their intention to gain while others lose.

Director Adam McKay showcased how knowing the viewers can pay off in creating an easy to follow film. He understands that numbers can usually intimidate the general public. Hence, his movie made an effort of following the whims of the people through using eccentric methods of presentation. These popular culture icons were tasked to explain business jargons. Used in the discussions are cameo appearances of Selena Gomez, Anthony Bourdain, and Margot Robbie who made sure that explaining the market trade does not bore anyone.

The movie also implored methods of storytelling that are seldom used in cinema. Characters would constantly speak directly in a camera when discussions become vague. The emotional struggle of the persona that cannot be manifested by on screen images is translated by a voice over narration. All these are manifestations on how movies can actually be modified in order to benefit the spectators.

Moreover, separate acts of Christian Bale (as Michael Burry), Steve Carell (as Mark Baum), Ryan Gosling (as Jared Venett), and Brad Pitt (as Ben Rickert) exhibit versatility. They were taken out of their usual roles in action, romance, and drama which further proved their ability as seasoned actors. Their masterful play as bankers showed the complex characters of people in the marker trade. Thus, their performances helped in a better understanding how the mindset of people in the industry runs.

Although the film humanizes the people behind selfish corporations and banks that benefited from the market collapse in 2008, it does not belittle the grief and hardships of the common people. The Big Short exposes a flawed system which many of us continue to believe until today. In its closing remark, the film calls the attention of the viewers and tells them that the scheme is still used by several large banks disguised as ‘bespoke tranche opportunity.’

There are several valuable lessons found inside this film and they are all relevant and important. The Big Short will be best remembered as one movie that successfully joined together seriousness and comedy.

1 thought on “The Big Short: The serious comedy”