A great movie production does not always entail an over-the-top production design (Guillermo del Toro style) or unnecessarily overdone cinematography (Michael Bay’s insignia). In the case of Ex Machina, a great movie production can happen in a confined house with three main characters and a brilliant screenplay.  It is a kind of film best appreciated by moviegoers who like to be baffled with both visual effects and philosophical questions. 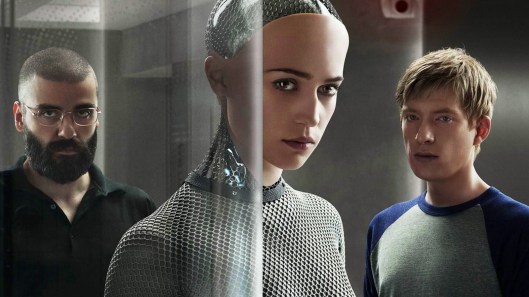 A programmer (played by Domhnall Gleeson) wins a company contest allowing him to spend a week in a private estate of his boss (Oscar Isaac). In the course of his stay in a modernly exquisite house, he was tasked to determine the abilities as well as the consciousness of a robot (played Alicia Vikander). The beauty and the intelligence of the machine are alluring. But what allures the two men more is its knack for deception.

Ex Machina started with a clean and clear storyline about the development of artificial intelligence. The sequence of events is well-defined which the audience would easily follow. A billionaire visionary would like to develop an artificial intelligence (AI) unit which his employee would test and validate. It is as simple as that. Yet, in the development of the plot, details thicken and discussions deepen. Questions of machine superiority, neuroscience development, and scientific ethics began to arise.

With the limited number of cast, the camera highlights the acting prowess of each of them. Vikander’s portrayal of a beautiful robot is both highly entertaining and mind boggling.  The contrasting personalities of Gleeson and Isaac, on the other hand, embodied the growing debate underneath the story. They voiced out the on-going disputes on the mind of the viewers. How much are you willing to sacrifice for development? When would you draw the line between man and machine? Are you willing to create and kill for the sake of science? Also needed to be appreciated is Sonoya Mizuno’s performance. Despite delivering few lines, her character contributed to the enigma hovering on the thought of the audience.

Writer and Director Alex Garland showed his creative brilliance in this film. He is genius in creating characters as complex as the ones in the story. His decades of conceptualizing Ex Machina paid off when the storyline came to be outstanding. Aside from the directing and screenplay, the film editing, visual effects, and production design teams helped in perfectly narrating a story difficult to be visualized.

Aside from the awe-inspiring work of the filmmakers, the audience is hooked on the story because of the film’s ability to arouse intellectual and emotional stimuli. In the beginning, the film asked the viewers to have basic understanding on the concept of artificial intelligence and neuroscience. After this, it fed them with empathetic tales which anyone can relate to. Seeking freedom, finding justice, and fighting for your cause are all virtues that can make the audience root for the characters. In the end, the movie’s type of storytelling became effective.

While many films today choose to play safe and narrate monotonous tales, Ex Machina proves that thinking is necessary in cinema. Moviegoers do not only seek visual appeal and intense acting, rather, they also search for a plot that would make them wonder and question things. What this film does differently from other intricate stories is that it does not intimidate the crowd. It presents innovative ideas and guides the audience until the end. This film is ripe and well-done. It has clear and intricate plot, outstanding production, and good understanding of audience. It surely is one of cinema’s finest.