Once there was a budding comedienne with sheer talent paired with timely opportunity. She was an instant celebrity for the viewing crowd saw in her the revolution against boring, repetitive, and slapstick comedy. Hers was an innovative and ingenious style that promised to end the tasteless humor of the thriving sexist macho comedians before her. She debuted her plight with a movie discussing gender equality and LGBT rights. As the year goes on, she reenters the club with new sets of plot that goes worse each year. It is the story of Vice Ganda, her revolution, her rise to fandom and her eventual fall to the profit-driven movie industry. 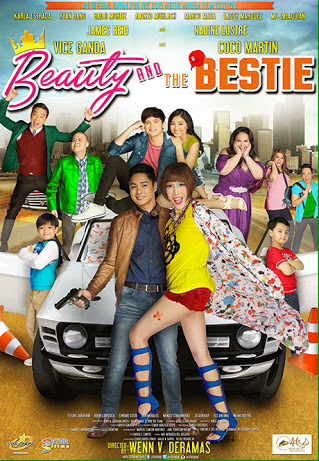 Beauty and Bestie is not only about Vice Ganda of course. But the film, in its entirety, plays around the concept of what I would like to call Vice Ganda’s brand of comedy. You see, from being a revolutionary, the once beloved comedienne has now built a brand of her own just like the ones we thought she would overturn. Vice Ganda forgot to reinvent herself. Each year, we see the same sarcastic and self-inflicting jokes found in her performances. And her offering this year brings beauty pageant in the front scene, which by the way has been repeatedly capitalized in her noontime program Showtime.

Vice Ganda’s journey is reflective of the flawed system that thrives in the Philippine movie industry. While the MMFF was created to display filipino ingenuity in film, the festival has let itself to be the venue to celebrate anything but socially relevant movies. Does it mean that comedy and thriller films are necessarily bad? Definitely not. There is an unending litany of comedy and thriller films acclaimed because of their intention to expose, parody, and overthrow norms and problems in our society. Yet, these are not the kind of movies that are celebrated in the lineup of MMFF. What we have are play safe stories backed by big production houses with a mediocre to low quality output.

Surely, not everything is wrong with the Beauty and Bestie. Just like previous Vice Ganda and Wenn Deramas films, this movie presents an alternative on the Filipino view of gender and society. There are various social commentaries focusing on politics (on including Binay’s corruption), gays on beauty pageants, and the definition of beauty. These are important topics to be discussed in a large audience such as the movie house.

Alongside Vice Ganda’s brand of comedy are some redeeming acts. Coco Martin’s action acting, Jadine’s (James Reid and Nadine Lustre) popular love team, and Marco Masa and Alonzo Muhlach’s overloading cuteness spice up the already predictable plot. They gave minute but noticeable difference on the performance of the main act.

One might argue that if the quality of Vice Ganda films is truly less than how they earn, why would people continue coming back for them. This, I do not discredit. Star Cinema and Viva Films have perfected the science and art of revenue-making. While independent filmmakers are struggling to present intellectual and socially relevant films, others bank on the expensive power of advertising to achieve commercial success.

Beauty and the Bestie will surely earn high revenue in this festival. Vice Ganda with the big production houses where she belongs to, will once again confirm their “brilliance” in making movies. And in the next years, films with the same format and quality will continue to flood the MMFF. The so-called “success”of this and other few films in the festival says a lot not on the excellence of film industry in the country but the quality of moviegoers that we have developed through the years.