My Bebe love is for those who crave for anything about Maine Mendoza and Alden Richards. It is a story of love, its difficulties, and its complications. Also, it is a story of how a pair of budding love team is exploited by media, by commercial brands, and by Vic Sotto. For Aldub fans, it is a revelry of kilig, a celebration for their idols’ debut in the cinema industry. While for movie enthusiasts, it is a painful movie experience of becoming a first-hand witness to modern day capitalization. 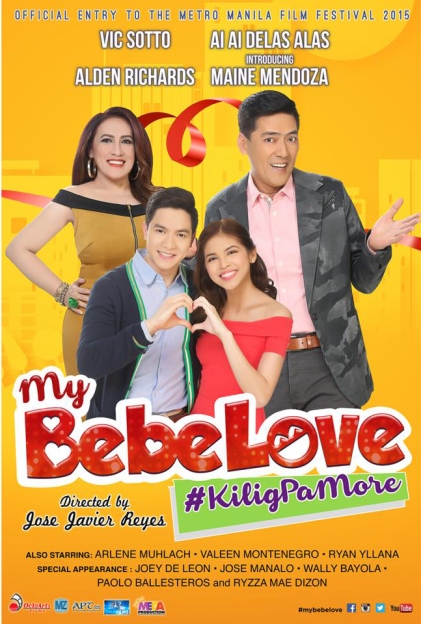 The movie is advertised as an Aldub film. But, do not be lured. It will not present the best of the tandem’s acting. The film revolves around the two but does not reach their core as artists.

My Bebe Love centers on forbidden love. It is about Dondi (Alden) and Anna (Maine) who had a love at first sight. Their guardians vowed to forbid them from being together. As Vito (played by Vic Sotto, Anna’s father) and Cora (played by Ai-Ai delas Alas, Dondi’s aunt) device a plan against the young lovers, they find themselves deeply involved consequently developing a special bond. The plot the refocuses to Vito and Cora’s fight for love.

From the beginning, Aldub is made for a 15-minute glory. Hence, it was a surprise when the love team lasted long to have several TV commercials and shows. While the two are making the best of their popularity, the media that created them wanted to have a payback. Aldub became the new face of pop culture. From print to social media, they were made to sell and please the crowd. To see the two in motion picture might be too premature for some. Alden Richards cannot give more than a beautiful face and Maine Mendoza her typical candid pabebe. The movie director at the very least could have provided sufficient acting workshops for the two.

Moreover, the film overflows with product endorsements. After every 15 minutes, an advertised item is awkwardly included in the frame. To anyone familiar with the advertising aspect of film, product placements are totally fine unless they ruin the delivery of the narrative. In the case of My Bebe Love, the priority of the filmmakers is quite apparent.

Lastly, the movie, in spite of its efforts to be innovative, still falls under the pile of Vic Sotto films. For the past years, Sotto has created a movie empire intended for the MMFF. He seats in his comfortable throne while his chosen ones do all the hard work. He is over with Ryza Mae and Alfonzo Muhlach and this year, he clings to the box-office potential love team of AlDub. And while this pair continues to be profitable, they are meant to serve the boss.

My Bebe Love #KiligPaMore teaches us that love is economic. From the story of  Dondi and Anna to the story of Alden and Maine, love is intertwined with money. The mere is question is, who has the biggest gain in all these love dramas and what-nots?