By Lei Landicho and Heinrich Domingo

People tend to rationalize their world. We believe that all things are part of a grand narrative of life and that everything we see is a speck of a larger scheme. We work under this premise and search how history and future can be traced from our cultural artifacts, relics, or even daily objects. This search is continuous. Mapping out this intricate web might take some time to finish.

One idea that puzzles scholars and academics is the definition of being a Filipino (or Filipino identity). We are a nation colonized by three countries each leaving behind diverse traces of their culture. As a result, our values, concept of justice, and definition of development differs largely. Identifying a particular national identity would create unity among Filipinos and it shall create a stronger notion of being a community member. In the 21st century, it is interesting to look at what our treasured cultural materials tell about our identity. Such artifacts can provide us rich insights on how much past do we like to bring in the future.

Of CCP and the cinema experience

In her Doctoral thesis, Prof. Rina Locsin-Afable noted that “(t)he sine, as a social space, is a constitutive part of the formation of the city’s culture” (2011). She spoke not only of the figurative meaning movies (its morals and lessons) but also the actual space occupied by cinema houses.  The cinema industry and the cinema houses can help in understanding our identity as a nation. Prof. Locsin goes on in suggesting that an evaluation of the cine place can offer a glimpse on how we as a people evolve through time.

One of the country’s most famous cinema houses is the Cultural Center of the Philippines (CCP). This 5-decade edifice has its own share of political history but more than this is its undeniable significance in the progress of art movement in the country. Until today, concerts, ballet performances, theatrical shows, film showings, art exhibits and other activities are held in the hall. Every August, CCP hosts one of the biggest independent film festivals in the country – Cinemalaya.

Upon entering the place, visitors would be greeted with overwhelming three-piece chandeliers. They are made out of capiz shells and crystals. Sadly, these adornments were left hanging in the ceiling for several decades without proper care. Belio Lucero and his group Palayan Lamps Corporation did a recent restoration of the art pieces. His detailed storytelling can be read on his personal Facebook account.

He begins with sharing how the chandeliers were created for the CCP.

It has been a 47-year itch waiting to be scratched. Palayan Lamps was commissioned in 1969 to fabricate and install the three capiz-and-crystal chandeliers of the Cultural Center of the Philippines. It was only after 47 years that we were called back to refurbish these chandeliers.

Over the intervening years, the brass arms of the chandelier had oxidized and lost all its shine. Capiz tiles had clouded over and become less translucent. A lot of the Austrian cut-glass trim had fallen and been lost. Perhaps because of budget constraints and schedule conflicts, these chandeliers were never seriously maintained. In-house maintenance would merely dust and replace busted bulbs, but these efforts had no hope of bringing back the chandeliers to their original state. In fact, in an attempt to improve the tarnished brass parts, some pieces, which were originally mirror-polished, were serviced in place and painted black. For sure, the chandeliers were never brought down and dismantled for the needed servicing.

Despite being one of the high-brow art places in the country, CCP lacks funding from the government. The place is so big that many of its parts are not well-taken care of. The same goes with many historical buildings in the country. Although Filipinos love their media (we’ve elected an action star for President for god’s sake), there is little to no regard for history. Parks, churches, old buildings are left to rot in exchange for high-rise condominiums and big malls.

Lucero goes on to describe what makes these chandeliers so exquisite.

These chandeliers were designed by Dale Keller and Associates of Hong Kong, the CCP’s interior designers in close collaboration with National Artist, Arch. Leandro Locsin, the CCP’s architects. Even to this date, the design of the chandeliers’ structure, its general silhouette, was unique in comparison to the more popular all-glass chandeliers from Europe. Most especially, the daring use of capiz (an organic element) in combination with brass and glass was innovative and a design statement in itself. Capiz pendant lamps at that time were commonly seen in the form of Tiffany shades with capiz cut-outs and simple cascading shower-type pendants from Quinta market in Quiapo. No substantial project in the Philippines had ventured to use capiz so prominently. But the design mandate then to Locsin and Keller must have been apparently clear: make it Filipino, make it contemporary.

The love for the West

The high regard towards the mestizo (hybrid) makes the chandeliers exquisite. As Lucero described it, it was an innovation from Dale Keller (from Hongkong) and Leandro Locsin. We see here that despite the capability of Filipinos to create a unique product of their own, a foreigner’s touch would complete the deal. And this can still be seen by the way television adores Bea Alonzo, Anne Curtis, Pia Wurtzbach, and many more.

Philippines always celebrates its identity vis-a-vis its foreign captors. Although the United States gave the country a kiss of death during the World War II, majority of Filipinos still espouse the “American Dream.” People in the rural areas would often wish that America would have made the country one of its states just like Hawaii. The US has strongly marred our concept of identity at when the people buy merchandise, quality products would be called “imported” and low quality products “local.” (The colloquial term for fake products is “Chinese.”)

The mindset that celebrates hybrid culture defined the themes and characters in Philippine cinema. Our adoration to the mix culture made our films and television materials products of marriage between overly dramatic soap operas of Mexico, glamorized Hollywood culture of America, and restrictive depiction of “perfect” beauty of South Korea among many others.

The art of restoring

Lucero goes on in telling how they have to restore the capiz shells piece-by-piece. It was a tedious process but just like many of the Philippine art works, these art pieces have to depend on the meticulous hands of craftsmen.

All the capiz tiles in the chandeliers were replaced. Each raw capiz shell was trimmed to size, scraped, washed with muriatic acid, polished, bound by brass edging and lacquer coated to seal the shine. All these +11,000 capiz shells needed by one chandelier were done by hand. Some +4,500 new octagonal crystal beads were then interspersed and stranded with the new capiz shells. CCP management had insisted that the capiz tiles would be reoriented from the original with their long dimension horizontal. This they felt would present a broader side of the capiz shell to view. While the Austrian rectangular glass prisms were reused, new premium-grade K9 crystal octagonal beads were stranded with the capiz. K9 crystal is a type of laboratory glass that is used in cameras and microscopes, cut by machines and polished by hand. Cheaper many fold than the equivalent popular Swarovski crystals, they are hardly distinguishable from each other in terms of shine, brilliance, and color. At a friendly budget, this was seen as a welcome affordable improvement of the chandeliers’ glitter.

The luminaire members are all solid brass. Upon disassembly, they were all soaked in nitric acid to remove whatever lacquer remained and clear the accumulated dirt and grime of 47 years. The brass members were then polished on mechanical buffing wheels. When their original shine had been restored, they were then given a new coat of clear lacquer and baked in an oven to seal this protective coat. Such metal treatment would ideally protect the brass from oxidation for some 4-6 years, but definitely not 47 years.

Finally, all the sockets and electrical wirings were changed. The 61 bulbs on each chandelier were replaced. Reassembly had to be done on site as transportation of built-up lamps would be prone to breakage. Thus ends the 47-year wait for us to scratch this itch. Hopefully, when one next visits the CCP and looks up at the omnipresent three chandeliers, one would do so approvingly of our efforts to bring them back to their 1969 beauty.

The long and tiring process of restoring the three chandeliers speaks of the difficulty to go back to the past and search for the essence of being a Filipino. Just like the chandelier, it would be impossible to turn our back from the influences of our colonizers and pretend that we have a pristine self-definition. We can no longer detach our solid brass members because if we do so, our capiz shells might just fall down and break into pieces.

The combination of our past and present makes Filipino-ness whole and understandable. Since we cannot deny the influence of our colonizers, we might as well embrace their contributions and acculturate what they have left in our land. 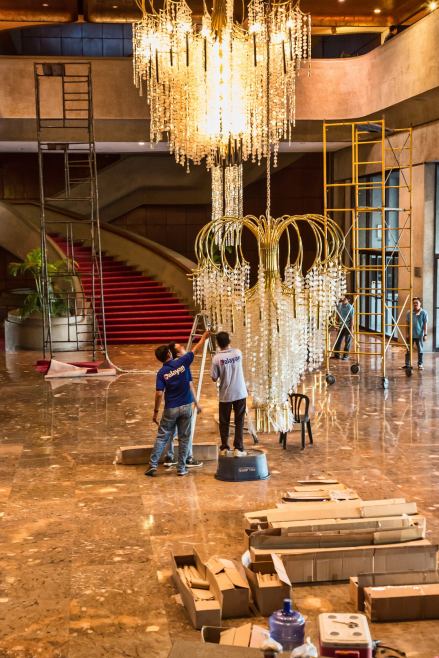 For a country that continues to evolve each day, we have a long way towards finding our identity as a nation. Despite its difficulty, the search for our national identity will greatly help us in creating policies, establishing laws, and planning our cities for a better future. It will enable us to identify how we want our country to be in the next decades to come.

While we look forward to our future, may we not forget to value our past and pay tribute to artistic works that created us today. Cinema houses (including its artworks and ornaments) shall be valuable in pursuit of self-understanding. They were a product of the journey that we as a people have undergone. And they shall continue to be witnesses to how we have developed and progressed over time.

*Photos and the narrative were posted with permission from Mr. Belio Lucero.