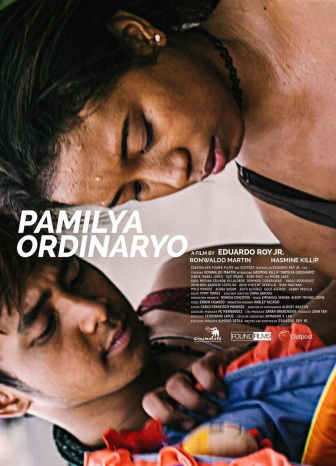 Teenage parents named Jane (Hasmine Killip) and Aries (Ronwaldo Martin) live in the street and survive through stealing. Their life takes an ugly turn when one day, their month-old baby Arjan was stolen from them. Pamilya Ordinaryo is a typical story of Filipino poverty. With the use of unconventional cinematography and bold directing styles, the film becomes an instant hit for a crowd that no longer sees the dividing line between real and reel.

Much has been said on how the film exposes the country’s piling problems of homelessness and urban poverty. We have seen sufficient images that provide disturbing memories on how deep our situation is. Allow me to digress a little bit. Let’s look at how the film treatment says something on the evolution of the Filipino audience.

Back in 2009, Brillante Mendoza’s Kinatay made a wave through its bold depiction of a chop-chop (piece-by-piece) body. His style back then helped the audience easily remember his narrative. Through gory images of death and poverty, viewers are reminded of the harsh conditions of Filipino lives. From then on we learned that films need not hold back because the crowd appreciates direct and straightforward presentations.

More than its interesting story, the film plays an important role in the history of Philippine Cinema for rebranding the already passé story of poverty. It experiments in its cinematography (sometimes hit, sometimes miss) through introducing CCTV shots. It uses the never-before tackled issue of kidnapping among poor families. And, it pushes the limit of how poverty can even come to a lower point. How could any person think of robbing the poorest of the poor?

They say life imitates art. I say it happens vice versa. Pamilya Ordinaryo’s popularity and box office success signifies the aggravating condition of poor Filipinos. Also, it marks the beginning of more blatant, sometimes bordering on being excessive, images of poverty. Although its screenplay and cinematography have rooms for improvement, the film in its entirety is a decent social critique and commentary.