Humans do not exist in the world of Zootopia. Instead, mammals have evolved and have found a way to live among each other. Predator or prey, it doesn’t matter; everyone gets along – at least that’s what they say. There is much more to this mammal-inhabited world. 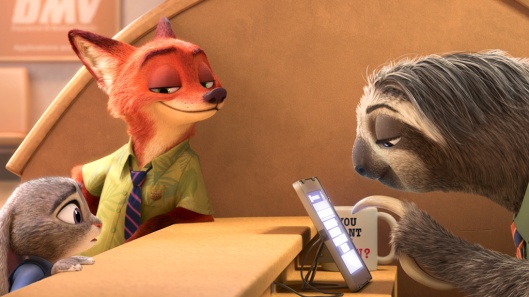 The story focuses on Judy Hopps, who dreams of becoming a police officer. Everyone – including her parents – discourages her from pursuing that dream, because rabbits can’t be police officers. Judy, however, perseveres and completes her police training, becoming the first rabbit to do so.

The rabbit gets assigned to Zootopia’s main station. At meeting, the police chief designates police officers to investigate the disappearances of several predators. Everyone gets to work on the case but Judy, who has to take care of parking duty.

At the displeasure of her boss, Judy manages to get on one of the cases. The police chief gives her 48 hours to solve the case or else she has to resign. She accepts the deal and her first tip leads her to Nick Wilde, a fox who makes a living as a con artist. The two team up and unravel a huge conspiracy involving the disappearances.

Zootopia has all the elements that make a great movie. The animation and the music are both superb, adding vitality to the film. The cast are able to make the personalities of the animals shine. Most importantly, the film tells a timely and relevant story.

It breaks stereotypes and sends a strong message against bigotry. It shuns prejudice and takes a closer look at intersectionality. The film shines light on pressing concerns present in today’s society, and gives hope that although it’s difficult, these can be overcome.

For instance, in the film, rabbits and foxes never get along – but both Nick and Judy eventually got to respect each other. The two let go of their prejudices towards the other species.

Zootopia fleshes out a thought-provoking concept and presents it in an engaging and funny manner. The film never goes overboard with its jokes and manages to stay sensitive, even when the subjects being discussed are complex. Despite the many facets of its story, there’s never a dull moment.

Let me close the review in true Zootopia fashion: is the film worth the time, money, and attention?

Well yes, yes it is. By far, Zootopia’s one of the best Disney films to hit the big screen. I say this not because of its excellent casting, catchy music, or stunning animation. I say this because of the themes Zootopia brings to the table, especially the message that despite our differences, we can all get along. Its relevance in today’s context is more than enough for it to merit praise.